Lead (/ˈlɛd/) is a chemical element with the symbol Pb (from the Latin plumbum) and atomic number 82. It is a heavy metal that is denser than most common materials. Lead is soft and malleable, and also has a relatively low melting point. When freshly cut, lead is silvery with a hint of blue; it tarnishes to a dull gray color when exposed to air. Lead has the highest atomic number of any stable element and three of its isotopes are endpoints of major nuclear decay chains of heavier elements.

Lead is a relatively unreactive post-transition metal. Its weak metallic character is illustrated by its amphoteric nature; lead and lead oxides react with acids and bases, and it tends to form covalent bonds. Compounds of lead are usually found in the +2 oxidation state rather than the +4 state common with lighter members of the carbon group. Exceptions are mostly limited to organolead compounds. Like the lighter members of the group, lead tends to bond with itself; it can form chains and polyhedral structures.

Lead is easily extracted from its ores; prehistoric people in Western Asia knew of it. Galena is a principal ore of lead which often bears silver. Interest in silver helped initiate widespread extraction and use of lead in ancient Rome. Lead production declined after the fall of Rome and did not reach comparable levels until the Industrial Revolution. In 2014, the annual global production of lead was about ten million tonnes, over half of which was from recycling. Lead's high density, low melting point, ductility and relative inertness to oxidation make it useful. These properties, combined with its relative abundance and low cost, resulted in its extensive use in construction, plumbing, batteries, bullets and shot, weights, solders, pewters, fusible alloys, white paints, leaded gasoline, and radiation shielding.

In the late 19th century, lead's toxicity was recognized, and its use has since been phased out of many applications. However, many countries still allow the sale of products that expose humans to lead, including some types of paints and bullets. Lead is a neurotoxin that accumulates in soft tissues and bones; it damages the nervous system and interferes with the function of biological enzymes, causing neurological disorders, such as brain damage and behavioral problems.

A lead atom has 82 electrons, arranged in an electron configuration of [Xe]4f145d106s26p2. The sum of lead's first and second ionization energies—the total energy required to remove the two 6p electrons—is close to that of tin, lead's upper neighbor in the carbon group. This is unusual; ionization energies generally fall going down a group, as an element's outer electrons become more distant from the nucleus, and more shielded by smaller orbitals. The similarity of ionization energies is caused by the lanthanide contraction—the decrease in element radii from lanthanum (atomic number 57) to lutetium (71), and the relatively small radii of the elements from hafnium (72) onwards. This is due to poor shielding of the nucleus by the lanthanide 4f electrons. The sum of the first four ionization energies of lead exceeds that of tin, contrary to what periodic trends would predict. Relativistic effects, which become significant in heavier atoms, contribute to this behavior.[a] One such effect is the inert pair effect: the 6s electrons of lead become reluctant to participate in bonding, making the distance between nearest atoms in crystalline lead unusually long.

Lead's lighter carbon group congeners form stable or metastable allotropes with the tetrahedrally coordinated and covalently bonded diamond cubic structure. The energy levels of their outer s- and p-orbitals are close enough to allow mixing into four hybrid sp3 orbitals. In lead, the inert pair effect increases the separation between its s- and p-orbitals, and the gap cannot be overcome by the energy that would be released by extra bonds following hybridization. Rather than having a diamond cubic structure, lead forms metallic bonds in which only the p-electrons are delocalized and shared between the Pb2+ ions. Lead consequently has a face-centered cubic structure like the similarly sized divalent metals calcium and strontium.

Pure lead has a bright, silvery appearance with a hint of blue. It tarnishes on contact with moist air and takes on a dull appearance, the hue of which depends on the prevailing conditions. Characteristic properties of lead include high density, malleability, ductility, and high resistance to corrosion due to passivation. 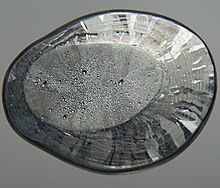 A sample of lead solidified from the molten state

Lead is a very soft metal with a Mohs hardness of 1.5; it can be scratched with a fingernail.[21] It is quite malleable and somewhat ductile.[22][f] The bulk modulus of lead—a measure of its ease of compressibility—is 45.8 GPa. In comparison, that of aluminium is 75.2 GPa; copper 137.8 GPa; and mild steel 160–169 GPa.[23] Lead's tensile strength, at 12–17 MPa, is low (that of aluminium is 6 times higher, copper 10 times, and mild steel 15 times higher); it can be strengthened by adding small amounts of copper or antimony.

The melting point of lead—at 327.5 °C (621.5 °F)—is very low compared to most metals. Its boiling point of 1749 °C (3180 °F) is the lowest among the carbon group elements. The electrical resistivity of lead at 20 °C is 192 nanoohm-meters, almost an order of magnitude higher than those of other industrial metals (copper at 15.43 nΩ·m; gold 20.51 nΩ·m; and aluminium at 24.15 nΩ·m).[27] Lead is a superconductor at temperatures lower than 7.19 K; this is the highest critical temperature of all type-I superconductors and the third highest of the elemental superconductors.